'The Shape of Water' : Abilities and powers of the Creature explained

I compiled this information from the novel by Daniel Kraus and Guillermo del Torro (who also directed the film), which gives much more information about the creature and a diffent version of how it was captured.

How Was The Creature Captured?

In the 1962, A mysterious US army report filed with redactions tells of a rumoured amphibious creature in the Amazon and a hard-bitten veteran, Strickland, is sent to capture it.  He seeks out uncontacted tibes known as vestigios, who know of its movements and have long worshipped it as a god.  After many brutal months in which most of the party die, he is able to capture it.  Strickland does this by trapping it in a dead-end cove using toxic chemicals and then cornering it in an underground cave.  By now he is a brutal and merciless killer and is portrayed as a 'Jungle God'.  He uses an aqualung to do this and it is suggested that the creature 'reaches out' to Strickland in a mysterious and unexplained way, as if perhaps giving up of its own freewill.  Based on its extensive powers at the end of the book, this perhaps explains why Strickland was able to subdue it.   However, Strickland certainly harpoons it, causing serious wounds which remain much later in the lab.  How the creature is moved all the way downriver and into the tank that transports it to the USA from the upper Amazon is not explained and remains something that stretches belief. 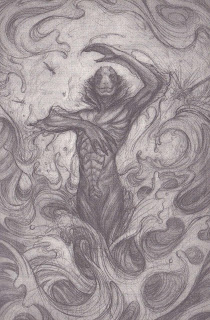 All who see the creature are awed as if by some primeval sense of wonder, an effect which is much increased when it is in open water.  At its first appearance, its 'savage, uncontrolled beauty' overpowers everyone, even Strickland temporarily.  Covered in scales and plating, it has a smooth face and can change colours to reflect its mood in in the manner of an octopus or chamelon.  Strong, muscular and graceful, it is somewhat larger than a human.  Its hands feature spines of surgical sharpness that can be precisely controlled.  It can shoot out a secondary lower mandible from its multi-jointed jaw to snatch or bite several feet in front of it.  It uses this ability to bite off two of Strickland's fingers.
The image below is from the book and provides a sense of scale. 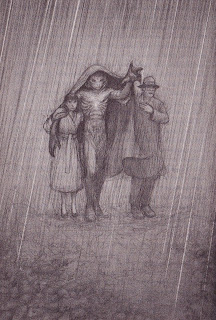 It is clearly stated several times that the creature is the last of its species, but the vestigios say that long ago there were more.  They know of their seasonal migrations that "stretch back generations".  The species may have existed as far back into history as the Devonian Period 400 million years ago, since Henriquez, the boat captain Strickland journeys with, claim to have handled fossils of it dating from then.  This is somewhat corroborated by the scientist Hoffstetler at the US bas, who calls it 'The Devonian' at times.

The creature is male and recognises and categorises humans as being male or female.  It mates with Elisa, who turns out to be a nascent creature herself, implying that it is perhaps not that far removed from humans as a species.  There is no suggestion whatsoever that it is an alien life form.  It is stated that it has compatible sex organs 'in the usual place' to a human male.  It is somewhat likely that Elisa is either a new mutation in evolutionary terms (or possibly a throwback) and it is possible that she can breed with the creature.  One complication is that the creature refers to itself in the third person as "we" in its point of view chapters, perhaps suggesting some sort of collective consciousness in touch with past creatures' memories.

The point of view chapters reveal an essentially non-aggressive being with something of a human-level intelligence.  Whilst apparently having developed no technology in its long history, the creature describes itself as an 'explorer' and is clearly inquisitive.  It views things in terms of the objects it is familar with, calling a cow-prod a lightning stick and a fridge a white rock.  It is capable of reconisably human emotions such as regret and love.  It rapidly learns sign language to a basic level and also appears to have a strong level of empathy.

Other abilities and powers

The creature has a near-elemental sympathy with water, moving in seas and rivers "in unimaginable ways" and "with perfect precision", not so much swimming through water as being "part of it".  Much of this talent is lost when it is kept in the tank at Occam Labs or in Elisa's bathtub, unsurprisingly.  This implies a very strong connection to natural water is essential for the creature to thrive and indeed, it almost immediately regains health and gains magnified abilities in minutes when it is released into the canal and sea at the end.  This also explains why it was more or less unharmed by several bullets at the end but long-injured by Strickland's harpoon when kept in the tank.  It needs salt water to breathe, but can live for a mqaximum of 30 minutes in air.  This time can be extended a little by pouring water on the creature's gills or if it is raining heavily.

Some of the creature's powers are effectively magical by the end of the book and are ironically the ones the scientists should have been most interested in.  He is able to sense that Giles is sick with something like cancer.  The creature can regenerate rapidly and ages at a very slow rate.  It is stated than it is likely centuries old.  It can transfer some of this healing ability to others, which it does to Giles, partially reversing his ageing.  He does the same to Eliss, healing her after she has been shot in the chest, a very serious wound indeed that likely damaged her heart.  He also helps her begin using her hidden gills.

The creature states that animals are in harmony with it and share some kind of psychic sympathy with him.  He uses this ability to hunt, eating a cat at one point.  He also uses it to summon legions of rats, bugs and other animals during his escape.

It is also arguably implied that the creature has some sort of control over the weather, possibly unconsciously, since Baltimore experiences an unnatural drought for months while the creature is captive there and a rain storm of Biblical proportions starts as it escapes, which allows it to reach the sea from the canal.

All that we see or seem

Kingerz
Educator and paranormal investigator based in Melbourne, Australia.