The Evil That Haunts the You Yangs Heights


Yesterday’s sunset was an amazing sight from the still sun warmed granite of Corio Ridge Tor, the fingertips sore from the twenty routes of the day. On the way out of the park, I had stayed back alone and wandered up to check out the routes on this lonely granite outpost in readiness for the next visit. There was no track and by the time I found the climbs, the sun was setting. Some strange effect had created a plume of rainbow-coloured light in the atmosphere above, and the unusually hot for autumn 30+ degree day was slipping away in a blaze of tragic glory. By some trick of the environment, or because of natural acoustics, I could not hear the distant roar of the Melbourne-Geelong road carrying thousands of commuters home in the fast-gathering dusk. There was almost no sound at all. Corio Bay took on the same sheen as the orange-rusty granite I sat upon as I watched. I knew that the 500 metre bush-bash down to the car would be unpleasant in the gloom, but such was the wonder of the view that could not bring myself to leave just yet.

That was a mistake. But I was happy, even with fingertips sore from the day’s crimping on razor sharp crystals. I was feeling pleased at having ticked some good routes like Question of Ethics and Slip Slop Slap (at last). 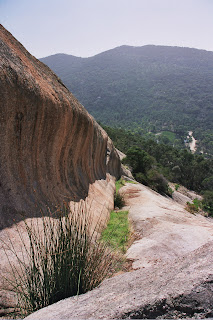 ‘It has never been easy being the You Yangs writes Bill Andrews in the VCC guide…and never a more accurate phrase. If the You Yangs did have a guardian spirit, it would have to be angry…The place is an environmental wreckage, its trees slowly being strangled by dense thickets of South African Boneseed weed, absorbing what little moisture the native trees get from the six-year drought. Feral goats roam at will. I used to see koalas, but one wonders what they would eat now. The atmosphere is one of a landscape suffering a long, slow, thirsty and drawn-out death. Most of the trees are dead or dying. The crags are fast becoming overgrown with weed and some are now truly inaccessible. At Corio Ridge, I felt as if I was the only climber to have seen the excellent starred routes below me in months. The easily accessed outcrops like Urinal and Royalty Wall are soon all that will be left.


The day would soon end in a nightmare of terror, but there was at first no sense of this as I watched the day fade from the pinnacle above Blood On The Tracks. It is true that I had heard the spooky stories. A few months ago I had been helped out by the RACV when I had locked myself out of my car. The mechanic told me then that one of the guys in his workshop – a pretty tough fellow in all other ways – had fled the You Yangs in fear one night after being called out there in the late 90s. He would not say what had happened, and he had ever since refused to take calls at dusk in the You Yangs, even though that placed his RACV contract at risk. And then too, there is the experience of Russ Crow as told in the 2001 VCC SW Victoria Guide: how he also ran from Gravel Pit Tor in fear:

“Russ Crow therefore felt particularly satisfied when, many years ago, he sat atop the tor. He had just spent several hours on the main routes using a hessian rope as a self-belay. He was climbing well and felt pleasantly tired. He lit up his one remaining cigarette and watched the slight wind stir up small dust whirlpools on the ground 20 metres below. It was now late evening and the setting sun cast long surrealistic shadows across the hillside. The evening sky was slowly turning steel blue and a slight chill began to grip the air.


"As the last of the daylight slipped away, a full moon rose behind the tor and bathed the area in soft light. Russ stubbed his cigarette and decided to head for home. He coiled his rope, packed his sack and made his way towards the descent gully. Then, without warning he was overwhelmed by a sense of fear. His head began to spin. He looked up to the skyline, the profile of the tor was moving and swimming before his eyes, the whole earth was moving. He felt the blood drain from his head and his body shook uncontrollably. He staggered, his body drained of strength, lurched forward and he stumbled. Gripping the side wall he dragged himself towards open ground and the relative safety of his car.


"After what seemed to be an age he reached the car, fumbled for his keys, sat inside and ran his fingers through his hair - it was bolt upright! Fear gave way to panic, he switched on the engine, found a gear and made for the open road. Only when he reached the main Geelong Road did he stop, get out, and was instantly sick.”

But these tales meant little to me…After all, the You Yangs are no sort of obvious spiritual outpost, about as far away from Ululru as it is possible to get. True, Indigenous people once frequented the area, and held parts of it sacred we are told…but this seems impossibly distant and remote now.

All I can say is this: the same sort of thing happened to me yesterday at dusk. There is no ‘ghost’ as such…but I believe that there exists in the You Yangs something that common sense struggles to explain.

Suddenly, a presence made itself known and I was inexplicably terrified: a more-than-horror-movie kind of fear that I had not known since childhood nightmares. What was it? I can’t explain…it is some sort of knot of malignant ill-will that stares at us with an active hatred of life and possesses an invisible but actual physicality. I sensed its sudden and very near presence, just as I imagine I would if I awoke at night and some stranger was in my house, even in my very room: without seeing them, you would somehow be sure that they were there. Whatever it is, when it happens there is a moment of vertigo and almost a blurring of vision. There is no sort of creeping fear…the horror is not at all such as you might feel when a climb goes wrong. It envies our energy and life and does not wish us well.

I will not write here of the frantic downclimb from the pinnacle, or of the wild, leaping escape I made as I ran in terror through the dying wattle forest of the Corio Ridge, crashing through snapping trees and through cobwebbed tangles of boneseed.

Laugh or scoff as you like. Are we not climbers, who can rise above fear? Be that as it may, I shall not again want to be alone on the heights of the You Yangs at dusk.

All that we see or seem

Kingerz
Educator and paranormal investigator based in Melbourne, Australia.